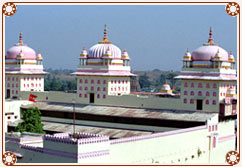 Day 02: Agra- Gwalior
Early morning you will leave for Agra, the city of the Taj Mahal. Upon arrival at Agra you will go for a sightseeing tour, covering the Taj Mahal, Agra fort and the tomb of Itmad-Ud-daulah. Later you will be driven to Gwalior. On reaching Gwalior you will transfer to hotel and spend the night at the hotel.

Day 03: Gwalior- Orchha
Breakfast at the hotel follows sightseeing tour of Gwalior. Sightseeing includes the 19th century Jai Vilas Palace, Usha Kiran Palace, Gwalior fort, Man Mandir, Gujri Mahal and the tomb of Mohammad Ghaus. After sightseeing at Gwalior you will be driven to Orchha. Orchha is a beautiful medieval town and was once the capital of the Bundela kings. Upon arrival at Orchha you will check-in at the hotel. Spend rest of the time relaxing and overnight at hotel.

Day 04: Orchha- Khajuraho
Breakfast at hotel follows a morning tour of Orchha. The places of interest at Orchha are the Jehangiri Mahal, The Raj Mahal and the Laxmi Narayan temple, both noted for their fine frescoes and mural paintings. Return to hotel for Lunch and later in the afternoon drive to Khajuraho. Khajuraho was once the center of the Chandela dynasty.

Day 05: Khajuraho - Varanasi
Breakfast follows a visit to the Khajuraho temples. UNESCO has declared the temples of Khajuraho a 'world heritage' site in order to preserve the rich legacy of architecture, bequeathed to future generations by the Kings of the Chandela dynasty. Late in the afternoon you will be transferred to airport for Khajuraho/Varanasi flight. Upon arrival at Varanasi you will check into hotel and relax for a while. Later in the evening you can take a walk in the surroundings. Overnight stay will be at hotel.

Day 06: Varanasi- Delhi
Early morning you will be taken to the Daswamedh Ghat for a boat ride on the holy River Ganges to see the cremation Ghats and bathing rituals. Return to hotel for breakfast and later visit Sarnath. Sarnath is one of the holiest Buddhist sites in the world, where Buddha preached his first Sermon. Sightseeing at Sarnath covers the Buddhist temple, Stupas, archaeological museum and ancient ruins. Later transfer to the airport to catch the Varanasi/Delhi flight. Upon arrival at Delhi airport, you will be transferred to hotel where rooms will be available for wash and change. Dinner at the hotel follows transfer to airport for flight back home.