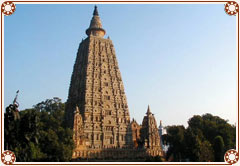 Day 2: Delhi- Lucknow- Sravasti
Leave Delhi by flight or train for Lucknow in the morning. Upon arrival at Lucknow you will be driven to Sravasti (170 km). Sravasti was the capital of Kosala Mahajanapada in ancient times. Sravasti is also known as Sahet-Mahet. Sravasti is renowned for the supernatural feats showed by Lord Buddha, sitting on a lotus, and for other stories that are linked with Buddha. It is said that Lord Buddha spent 24 rainy seasons at Sravasti. On reaching Sravasti you will be transferred to hotel. Overnight stay will be in Sravasti.

Day 3: Sravasti- Lumbini
After breakfast at the hotel you will be taken for a sightseeing tour of Sahet Mahet (once the capital of ancient Kingdom of Kosala), Jetvana Vihar and Buddhist temples. From Sravasti you will be driven to Lumbini (in Nepal, 225 km). Upon arrival at Lumbini you will be transferred to hotel. Overnight stay will be in hotel at Lumbini. Lumbini is the birthplace of Gautama Buddha, the founder of Buddhism. Lumbini is also one of the UNESCO world heritage sites.

Day 4: Lumbini- Kushinagar
After breakfast you will be taken for a sightseeing tour of Lumbini. Sightseeing covers Mayadevi temple, Ashokan Pillar, Buddhist temples, Pushkarni (the sacred pool), sanctum sanctorum of Buddha's birthplace and stupas. After Lumbini you will head for another sacred Buddhist place, Kushinagar (161km). On reaching Kushinagar you will be transferred to hotel. Overnight stay will be at hotel in Kushinagar. Kushinagar is the place of Buddha's Mahaparinirvana (the final bowing out).

Day 5: Kushinagar- Varanasi
In the morning you will visit the Mahaparinirvana temple and the Ramabhar Stupa (the cremation place of Lord Buddha). Breakfast follows a drive to Varanasi (260 km). On arrival at Varanasi you will be transferred to hotel. Overnight stay will be at hotel in Varanasi.

Day 6: Varanasi- Bodhgaya
Early in the morning you will be taken to Ganga Ghats for a boat ride on the Ganges to see bathing and cremation rituals. Morning city tour of Varanasi follows after breakfast. Sightseeing tour covers the Bharat Mata temple, the Banaras Hindu University, Vishwanath temple etc. You will leave Varanasi for Bodhgaya (242 km) via Sarnath. Sarnath is the place where Lord Buddha gave his first Sermon. Attractions at Sarnath include the Buddhist temple, Stupas, Archaeological museum and ancient ruins. On arrival at Bodhgaya, you will be transferred to hotel. Overnight stay will be at hotel in Bodhgaya. It was at Bodhgaya where Lord Buddha attained enlightenment under the sacred Bodhi Tree.

Day 7: Bodhgaya- Patna
Breakfast at hotel follows a visit to the Mahabodhi temple and other monuments and edifices associated with Buddhism. From Bodhgaya you will be driven to Patna via Rajgir and Nalanda.

Rajgir is a place of great significance for Buddhists and Jains. Lord Buddha spent 12 years at Rajgir and the first Buddhist council was held here. Sightseeing at Rajgir covers the Gridhakuta Hill, Bimbisara Jail and other Jain and Buddha monuments. From Rajgir you will be driven to Nalanda (14 km).

Nalanda was a great center of learning in ancient times. Nalanda was one of the greatest monastic universities of the ancient world. At Nalanda you will visit the ruins of the Nalanda University, temples and stupas. From Nalanda you will head for Patna (90km). On arrival at Patna you will be transferred to railway station/airport to connect train/flight for Delhi.

Day 8: Delhi
Upon arrival at Delhi you will be transferred to the international airport for onward destination.